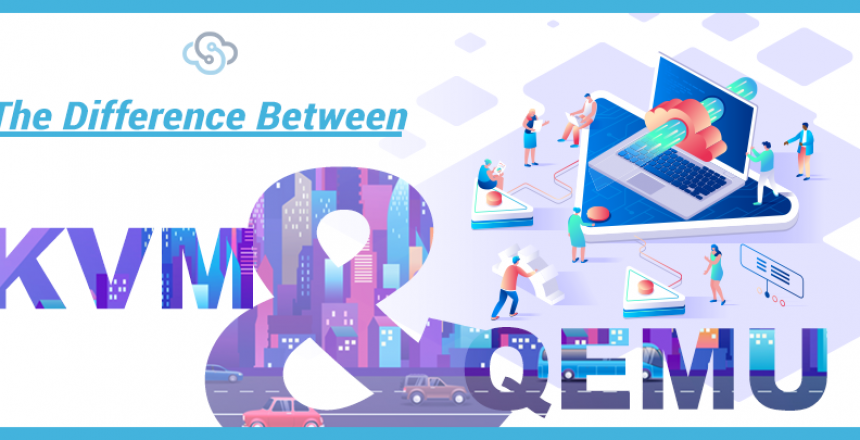 What is the Difference between KVM and QEMU

There are several choices in the server market that aren’t always explained in detail. Therefore, making decisions for your project can be difficult. One of those tidbits of information is what type of hypervisor the machine is running. Our goal today isn’t to become a master of what everything means and how to use it. Instead, the goal is to narrow the scope and understand the difference between KVM and QEMU. Alongside those differences, we’ll be exploring the benefits of KVM and QEMU as well as reasons that you might use either or.

To understand what KVM and QEMU mean, we need to consider what a hypervisor is and what it does. A hypervisor is a process that separates a computer’s operating system from the host’s physical hardware. There are two types of hypervisors:

What does KVM and QEMU mean?

KVM and QEMU are two different hypervisors that have their own uses. KVM, or Kernel-based Virtual Machine, is a Linux Kernel Module.

It is considered a type-1 hypervisor, meaning it is a full virtualization solution for Linux on x86 hardware containing virtualization extensions such as Intel-VT or AMD-V. Paired with these extensions, KVM provides the ability for a portion of the physical CPU to be directly mapped to the virtual CPU. This means that information can be passed and executed directly on the physical CPU mapping.

KVM was implemented to gain advantages of hardware assisted virtualization present in modern generations of Intel and AMD CPUs. Prior to KVM, CPUs were fully emulated by software, which resulted in much weaker performance. This was due to the lack of access to physical hardware. Where KVM uses a piece of the CPU, QEMU emulates the CPU.

QEMU, short for Quick Emulator – is a type-2 hypervisor that emulates a machine’s processor through dynamic binary translation. Despite QEMU having the ability to run on its own and emulate all virtual machine resources, all emulation is performed in-software. This makes it very slow.

QEMU was written by Fabrice Bellard and is considered as free software, primarily licensed under the GNU GPL license.

Benefits of KVM and QEMU

KVM has several benefits that make it stand out from QEMU.

The combination of these features and benefits will result in the ability to run a powerful machine. As a result, KVM can then run programs that QEMU would not be able to do so. For example, in most cases you would be unable to run Docker instances on a QEMU instance. With KVM, however, this would not be an issue. A specific use case, for example, is when one might need to deploy an installation of Pterodactyl hosting panel to manage and set-up game servers. Without access to KVM and it’s feature-set, you’d be unable to make use of or install this particular panel.

Next, we’re going to move forward with QEMU.

QEMU also does not require administrative rights to run unless additional modules for performance improvements, or certain modes of it’s network connectivity model are utilized.

QEMU includes a wide variety of guest operating systems available such as:

QEMU is integrated into many different VM solutions.

QEMU has a large number of features and a wide range of use, as you can see. It can integrate into several major projects such as VirtualBox, Win4Lin Pro Desktop and more. In fact, it’s normally paired with KVM. QEMU can make use of KVM features like acceleration when the target architecture is the same as the host architecture. With QEMU’s ease of use and simplicity to install, it’s understandable why one might make use of QEMU for fast and easy virtual machines.

KVM vs QEMU, which one is right for you?

In conclusion, the difference between KVM and QEMU are the two different hypervisors. Performance and the ability to run certain projects set aside each hypervisors. Therefore, the benefits of KVM and QEMU can vary. QEMU while slower, can be more versatile and general use friendly. The uses cases differ, though they retain one similarity; they need more power. More power will give that small bit of juice to a project, or host instances of game servers through a simple to use control panel software. At the end of the day, both QEMU and KVM have benefits that shine for each user. That said, consider your project’s needs before purchasing a server. Thus, if you predict the want or need to use Docker, that automatically rules out QEMU.