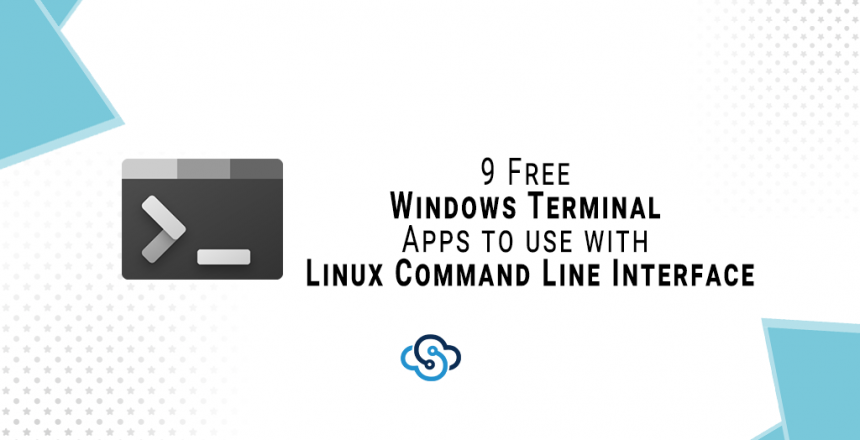 In this blog post, we will show you 9 free Windows terminal apps to use with Linux Command Line Interface. These terminal apps will assist you with your journey into the Command Line world. Of course, these are not the only free terminals out there. In fact, you can find a vast number of them scattered across the web with a simple google search. However, everyone has their own preferences and needs when it comes to using a Terminal client. Therefore, we hope that there is at least one on this list that suits you!

First up on the list is Alacritty. Alacritty is a beta-level terminal emulator. It’s missing some standard features and has some bugs, however, the developers claim that there are several users who are using it as their default terminal.

For more information, check Alacritty out at: https://github.com/alacritty/alacritty

Following Alacritty is CMDER Console Emulator. CMDER’s creators describe it as a software package that was created out of pure frustration based on the lack of ‘nice’ console emulators on Windows. It is portable, sleek, and has options for a fully decked out UNIX experience.

Read more: Navigating Your File System in the Linux Terminal

The third free windows terminal app on the list is Fluent Terminal. This one is a little bit different as it sideloads itself instead of following your standard installation. It has support for theming and customization, built-in SSH and MOSH support, and can even be integrated into Explorer’s context menu.

Another competitor is Hyper. Hyper is a super customizable, and highly configurable terminal emulator for a Linux Command-Line interface. It utilizes a plugin store to allow for submitted themes, and custom plugins to really make it feel just right for the end-user. It’s going to be a close call between this and terminus.

Now let’s take a look at KiTTY. KiTTY is a fork from version 0.71 of PuTTY, which the creator states is “the best telnet / SSH client in the world.” It allows for an easier time when managing PuTTY sessions, and can quickly open multiple sessions as the user needs to. As it is forked from PuTTY, users should feel right at home if they have any prior experience.

On to the tried and true PuTTY client. PuTTY is a free and open-source terminal emulator. This free windows terminal app has been used for years and is well tested. It’s simple and gets the job done, but don’t let the simplicity fool you as it is still feature-rich where it matters.

We’re almost at the end of the list. Here is another interesting piece of software for a Linux interface. Terminus is an extremely configurable terminal emulator for Windows, macOS, and Linux. It is worth noting that Terminus is NOT a shell, minGW, or Cygwin replacement in any way. It is also not lightweight. It’s a heavier application built on modern frameworks. If you are working on a system with limited resources, Terminus may not be for you.

Now hear me out with this one. The Windows Command Prompt may not be the nicest looking thing out there, nor is it hugely feature-packed. However, what it is, is stable and tested. It’s been around for ages and comes pre-packaged with Windows. It has the juice needed to get most jobs done.

Last but not least is Windows PowerShell. This free windows terminal app is a Windows command-line shell designed for system admins. Windows PowerShell makes use of things known as cmdlets. Cmdlets are simple, single-function command-line tools that are built-in to the shell. While useful on their own, the real strength comes from combining these cmdlets together to achieve a larger purpose.

In conclusion, whether you want to personalize your terminal and customize every little detail, add plugins and extensions, or simply just need a fast and minimal experience – you have options! Gone are the days where everyone used the same basic terminal. We’ve entered into the modern age of computing, producing, and designing. It’s only natural for the tools we use for those jobs to follow suit.