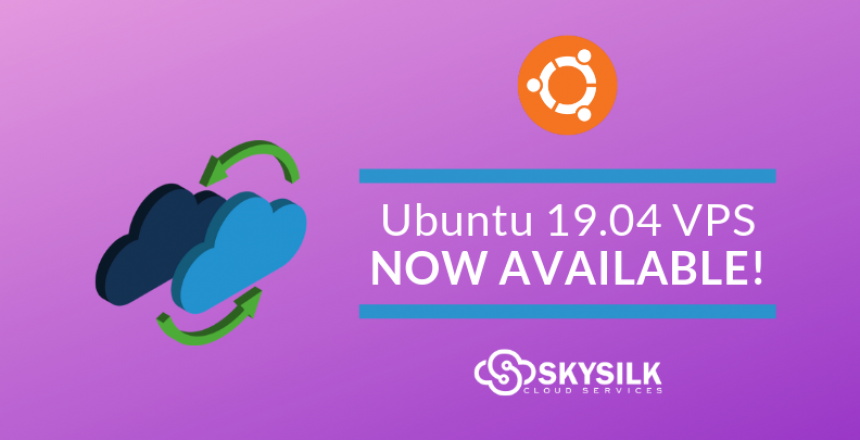 Following up on last year’s arrival of Ubuntu 18.04 LTS, we are happy to announce Ubuntu 19.04 has dropped and been updated to the SkySilk Cloud Platform. Read on for more info about Ubuntu 19.04 (Disco Dingo), how to upgrade to Ubuntu 19.04 from older versions or an existing Ubuntu VPS, and how to get an Ubuntu 19.04 VPS.

Disco Dingo is the latest Ubuntu OS update to be released and includes a host of up-to-date features. These include toolchain upgrades, updated packages, an updated kernel, and improved security.

Per Ubuntu’s official wiki, some of the more prominent updates include:

Ubuntu 19.04 is based on the Linux release series 5.0. It includes support for AMD Radeon RX Vega M graphics processor, complete support for the Raspberry Pi 3B and the 3B+, Qualcomm Snapdragon 845, many USB 3.2 and Type-C improvements, Intel Cannonlake graphics, significant power-savings improvements, P-State driver support for Skylake X servers, POWER memory protection keys support, KVM support for AMD Secure Encrypted Virtualization, enablement of Shared Memory Communications remote and direct (SMC-R/D), Open for Business (OFB), and zcrypt on IBM Z among with many other improvements since the v4.15 kernel shipped in 18.04 LTS.

You can read the full and official release notes below:

We recently updated our WordPress template and introduced some new ones including TeamSpeak 3 for Voice-Chat, ShadowSocks for Private Proxies, Grafana for beautiful analytics & monitoring, and Sentora web control panel.

To install your own Ubuntu VPS, simply signup for a SkySilk account. Next, create a Linux VPS by clicking ‘New Container’, making sure to select Ubuntu 19.04 as your selected Linux OS.

How to Upgrade to Ubuntu 19.04 from older Ubuntu Versions

Note that the server upgrade will use GNU screen and automatically re-attach in case of dropped connection problems.

There are no offline upgrade options for Ubuntu Desktop and Ubuntu Server. Please ensure you have network connectivity to one of the official mirrors or to a locally accessible mirror and follow the instructions above.

Use promo code “SKY95UBUNTU” to save 95% off your first month. Offer is valid for new users only.